A “divorce” in Oregon legally ends a marriage or a Registered Domestic Partnership. In Oregon, a “divorce” is often referred to as a "dissolution of marriage" because the parties are dissolving their life together (they are dividing their “stuff,” including kids).

What If I Just Moved To Oregon?

The main difference between a legal separation and a divorce in Oregon is that spouses are still married after a legal separation. Like a divorce, a legal separation judgment can establish custody, parenting time, and child support. In certain circumstances, the judgment can also divide property and debts and establish spousal or partner support. The court costs, timelines, and requirements for mediation and parenting classes are generally the same as with a divorce. With an annulment, the marriage is “void,” as if it never happened. The filing fees for an annulment in Oregon are the same for a divorce or a separation.

Process for Obtaining a Divorce in Oregon 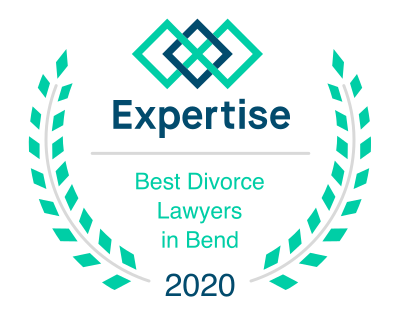 Divorce in Oregon – The Basics

After, or at the same time that a Petition for Dissolution is filed with the court, a party may move the court for temporary relief, pending the ultimate outcome of the case, or the judgment. This type of temporary relief is known as “pendent lite” relief. If a party seeking pendent lite relief prevails the court issues an order directing the other party to do something or in some cases, to not do something. Speak with our Bend divorce lawyers today if you have questions about temporary relief.

Following are types of temporary relief that may be available depending on a party’s circumstances:

Temporary Use of the Marital Residence

Temporary Use of the Marital Residence is an order of the court directing either party or both to move out of a marital home for such period of time and under such conditions as the court may determine, whether the home is rented, owned or being purchased by one party or both parties. This type of temporary order may also direct

If you need more information about this type of order, contact our Bend divorce attorneys today!

A status quo order (sometimes called a temporary protective order of restraint or TPOR) is an order which, until custody or parenting time is determined in a final judgment, prevents each party from changing aspects of a child’s life including the child’s residence; the child’s present placement, daily schedule, and routine; and the other party’s usual contact and parenting time with the child. It also seeks to prevent a parent from hiding the child or leaving the state with the child without the written permission of the other party or the permission of the court.

Similarly, while a matter is pending, a party may ask to the court to determine the parties’ respective rights as they relate to parenting time, or visitation, with a child. This is usually called a “temporary parenting time order.” Again, because the matter is still pending in court, the court may later change its order in the final judgment. If you have questions about temporary custody and parenting time, reach out to our divorce lawyers in Bend, OR.

After a party initiates a divorce, separation, or annulment in Oregon it may take some time for the court to enter a final judgment. While the matter is pending, a party may ask the court to award them with an amount of money necessary to support and maintain their lifestyle called “temporary spousal support.” While temporary support is generally awarded according to factors similar to those the court considers when making an ultimate spousal support determination, the court often focuses on the party’s immediate needs and the other party’s corresponding ability to pay. Again, because the matter is still pending in court, the court may later change its temporary spousal support order in the final judgment.

Division of Marital Assets in an Oregon Divorce

In Oregon, a “divorce” is often referred to as a "dissolution of marriage" because the parties are dissolving their life together and in the process, they are dividing their “stuff” or “assets.” Under Oregon law, the allocation of property between spouses at the time of the divorce must be “just and proper” depending on the individual circumstances of the parties and their marriage. Importantly, the court has the power to allocate any asset owned by the parties collectively or individually.

To determine what is just and proper, the court will first look at when a particular asset was acquired. If the asset was not acquired during the marriage, then the court considers only what is just and proper in distributing that property without applying any rules. If an asset is acquired during the marriage, it is subject to a rule called the “statutory presumption of equal contribution,” which means the court will start by assuming the asset was acquired through the equal effort of both parties. If you need representation during the division of your marital assets, contact our divorce attorneys in Bend, OR.

A party may “rebut the presumption of equal contribution,” or prevent the application of the rule, if the party proves that the asset’s acquisition did not result from an equal contribution by the other spouse. The court will consider not only the monetary contributions of the parties but also other factors such as their contributions as a homemaker. Generally, in absence of other considerations, the appropriate division is usually an equal division.

If the court determines that the presumption of equal contribution has been rebutted, the court will generally divide the property according to the magnitude of each party’s contribution to the acquisition of the property. The court is always free to consider many, varied factors effecting the parties including the tax consequences to a party, the extent to which a party has integrated or commingled a separately acquired asset into the joint finances, how difficult it may be to disentangle the parties financially, and whether or not inequity would result from the award of such an asset to that party as separate property.

Division of Marital Debts in an Oregon Divorce

In Oregon, a “divorce” is often referred to as a "dissolution of marriage" because the parties are dissolving their life together and in the process, they are dividing their “stuff,” including the parties’ debts. Under Oregon law, the allocation of marital debts, much like the allocation of property, must be equitable depending on the individual circumstances of the parties and their marriage. An equitable division of the parties’ debts does not necessarily mean they will be divided equally or allocated to the party in whose name they were incurred. The court will generally try to financially disentangle the parties as much as possible.

If you are in need of further legal assistance with your divorce case, contact our Bend divorce lawyer at (541) 238-9210!

When you choose our team of experienced lawyers, we will take the time to listen to your needs and remain focused on that as we proceed with your case. We have the knowledge, skills, and resources to provide the quality legal representation you need.